I have two Windows 10 Pro machines, both upgraded from either Windows 8.1 or Windows 7.

but on the second machine I have:

So the underlying OS language is different.

BTW This has nothing to do with the system local you can configure in the Regional settings App or control panel. It's the language of the OS files.

So when the anniversary (Version 1607) update came along I downloaded the ISO using the Media Creation Tool. You have to pick your language, I choose en-gb because that's what my main workstation has.

The update worked well, but now I wanted to update the second machine without downloading another 3.3GB ISO file for en-us

I was thinking, maybe I could change the System Locale from en-us to en-gb but that's not really possible, because the Windows files are all in British rather than American English, making a registry change somewhere wouldn't work.

I remember when I first downloaded a Windows 10 ISO, the media creation tool wouldn't let me download an image for a different language than the one I was running. I got this rather hilarious message when trying:

So I always assumed I couldn't update an OS with a different language, but what harm is there in trying, after all I had an image of my system partition.

So I ran the en-gb ISO on the en-us system and it started fine, at some point it presented me with this dialog: 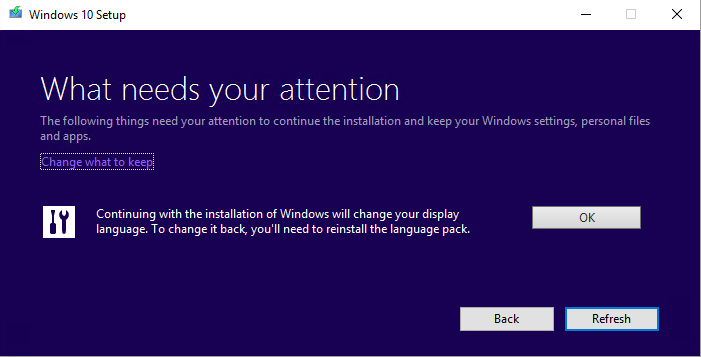 This makes perfect sense, after updating I'm expecting en-gb to be my system locale.

And again the update to 1607 worked fine, but when running SystemInfo.exe I still got:

So, I'm not sure it's a bug, because the OS files must be en-gb now. I will see how this system behaves.

Also, maybe the fact that en-gb and en-us are pretty similar could play a role here. I have no idea whether doing this update works when using more different language say, from de-de to es-es.