I took one of the red city buses towards the second class bus terminal, it was super crowded in the morning rush hour. My guide book tells me not to take these buses at all, but I never had any problems. Got on a chicken bus to the border which took about 3.5 hours. Changed my remaining Qs for a bad rate at the border and got my exit stamp for Guatemala. Tried but nobody would give me an arrival stamp in my password on the El Salvadorian side. Boarded another bus to Ahuachapan the first main town on the other side. It is much warmer here, we must be lower even though it is still pretty hilly. I checked into Hotel San Jose and the walked around town. On first sight, the prices are slightly lower than in Guatemala but it feels weird to use US dollars again, as this is the official currency of El Salvador. Got my trousers fixed in the market for 50 cents. This was the third time I was doing this and it always has been very cheap, no point in doing it myself. 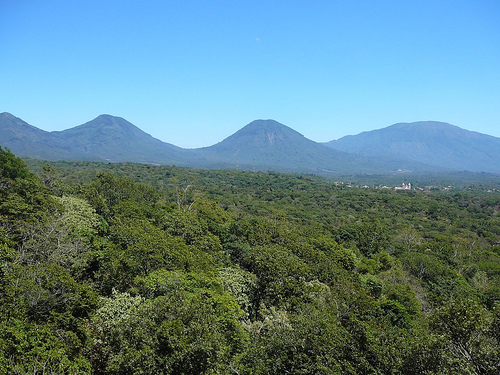 For today my plan was to walk along the ruta de las flores (The flower road) to a small town called Juayua which was suppose to have a nice hostel. I started out around 7:30 and after some hot dogs for breakfast on the street I walked several kilometers up the hill. Then a Ford Mustang stopped and the guy asked me whether I want a ride to the next town Ataco. Turns out he was born there but is now living in Oakland California. One of the many thousand El Salvadorians who live abroad and send money home to their families. He shows me around town and invites me to lunch with his family. It's only 10 and after visiting the viewpoint on a hill I continue walking, it is still a long way to go and I don't want to arrive in Juayua too late. It is still upload, so I take one of the local buses for 15 minutes to the next town, from there it is mostly downhill and I walk another three hours to Juayua. On the way there are many flowers indeed and plenty of coffee plantations as well. Nice views over the valleys towards some smaller volcanoes behind them. The hostel is indeed nice it has a sunny backyard with some hammocks. I meet some fellow travelers for the first time in 4 days. The town is very picturesque and quiet. I relax for the rest of the day.Today I went to the "Los Chorros de la Calera", a set of small but nice waterfalls, just a 30 minute walk away from Juayua. On the way I met a Canadian/English couple and their young daughter, they had hired a guide to get them there and I walked along and listened to his explanations. Below the various falls are nice pools, the water feeled cold at first but after a while was really refreshing. The really great thing here were some tunnels, you would walk up and around the mountain and climb into the start of the tunnel and then swim for some minutes to exit below the waterfalls into the pools. There was a strong current so you can just float down the tunnels, that was a lot of fun. Back in the garden of the hostel I met some Canadian girls and we went for a great dinner at a Mexican restaurant around the corner and ended the evening with some nice ice-cream which you can buy on every corner in the country.Like most of the big cities in Central America, San Salvador has many different faces, the city centre around the main square and main cathedral is one big market place, all the streets are filled with vendors selling mostly food and clothes but also all kinds of cheap junk from China. The government buildings up the road were interesting enough for a 30 minute stroll. Then there are more upmarket areas, I stayed in a guest house near the Boulevard de Los Heroes which is dominated the big Metrocenter shopping mall and various fast food joins. Up the hill in the university area were some nice cafes and restaurants. I also walked to the Colonia Escalon neighbourhood with even fancier shopping areas. Here I confirmed at an Apple specialist, that my new iPod is indeed already broken and can not be charged anymore. It was the weekend before the presidential election and on Saturday the left wing FMLN party took over the capital. People from all over country arrived by bus and truck to promote their party. There were Red flags everywhere and even more honking than usual. The next day the Arena party who is currently is power pulled in all their supporters and they were just as loud. The FMLN won the election for the first time, it used to be the revolutionary guerrilla organization during the civil war in the eighties. Again the little towns I visited in El Salvador were much prettier but San Salvador was the most interesting place.I took a chicken bus to Suchitoto, a picturesque little town in the northern mountains. Many colourful colonial buildings, cobblestone streets and a big lake down the road. It was pretty hot and I luckily there were fine licuados (blended fruit juices) at many corners. A few more buses took me to La Palma near the border with Honduras. I stayed in a huge room in the El Pital hotel and had excellent and cheap local food for dinner.
Full Itinerary:

5-Mrz-2009: Relaxing in the hammock in the courtyard in Juayua (Juayua, El Salvador)