In Nicaragua in March/April 2009

I took an early local bus to the capital, about 50 minutes away from Granada where I am staying. The bus stop in Managua is opposite the Universidad Centroamericana UCA. After turning town the numerous offers for taxis I walked towards the Tiscapa hill. On the way I bought some baked goods at the entrance of the Military hospital and a bag of fruit on the street for breakfast. To walk up the hill I had to pay 20 codobas entrance fee, but it was worth it, the view over the city and Lake Managua was great, there is also a nice crater lake just below the hill. There were guards everywhere but I was the only person up there until a small group of Dutch tourist come up in a bus. A huge statue of Augusto César Sandino, the namesake for the Sandinistas. 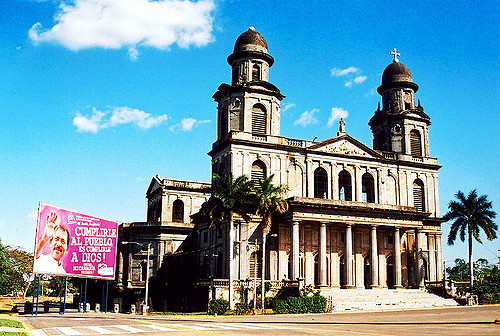 I had heard from other travellers who had been all over Central America, that Managua was the only place they didn't like and where they didn't feel save, so I didn't take my iPod or Camera, just the Lonely Planet and a little bit of money. I only spend five hours in daylight in the city but walked everywhere and didn't feel threatened at any time, it was the same as in all the other big cities.

Anyway I then walked to the old center. This area has been completely destroyed by a major earthquake in 1972 and most of it has not been rebuild yet, because more earthquakes may happen any time. Instead the people moved away into the suburbs and the city is now a collection of different small centers rather than one big one. Because it is so spread out, it is the greenest capital I've ever been in, there are so many trees and other green spaces everywhere, not parks but just empty fields with trash on them. It's a weird feeling, just opposite the National Assembly complex is a huge slum area where people live in small plastic huts.

The Plaza de la Revolucion in the old center is actually quite nice, on one site is the ruin of the old cathedral and on the other the National Palace of Culture, which has been rebuilt. There are hardly any people in this area, even down at the Malecon at the big lake it feels really dead. Everywhere the red and black colours and poster of the FSLN (the Sandinista National Liberation Front) can be seen. The party is currently in power again and the leader of the revolution Daniel Ortega is once again president of the country. Back in school the Nicaraguan revolution was a big deal for my left-leaning teachers and we learned a lot about the Sandinistas.

I walked on through different neighborhoods back to the University to catch the bus back to Granada.

Managua is certainly not the pretties city in Nicaragua but I think it is the most interesting one.

Back at the hostel I met five American Peace Corps volunteers and we went out for pizza and beers. 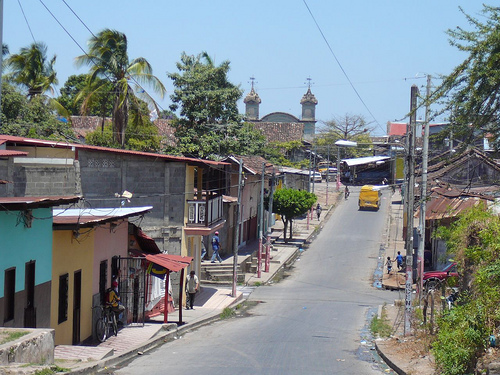 I wake up before seven as usual. It's hot in my twelve bed dorm, the fans under the ceiling don't help much as I am in a bottom bunk. I go for a quick swim in the small pool in the back of the Oasis hostel. Then take a shower and have a free coffee in the sitting area. Rather then going for the PCs right away I first do some laundry at the roof top where the clothes dry very quickly in the hot sun. Among with some other things I wask my silk sleeping bag which I haven't used or cleaned for some time, but this is a good opportunity. They do serve breakfast at the hostel but I usually get something on the street. Their menu prices are in US dollars which is something that always puts me off. So I walk down two blocks to the main market and buy some bananas, mandarines and a donut. I do eat back at the hostel with a nice cup of tea. Then it's on to do some work on my website. They have eight computers here but only two of them are fast enough for what I need to do. I finally completely cleaned up the fastest one. It had over 30 viruses on it and gave me a hard time in the past before I fully realized how exactly they work. This morning I look into Slide show controls in Silverlight 2 but only spend half an hour on it, the internet is slow this morning. My sight seeing trip for today is the large cemetery a 30 minute walk to the east. It's hot but it quite interesting. As everywhere in Central American the grave are above ground mostly in little concrete buildings that have between six and 40 spaces. There is a nice central building and lots of little statues all over.
On the way back to the centre I look out for some electronic shops. My new iPod USB cable is already broken and my second photo memory card broke as well and is now in a read-only mode. But there don't seem to be any stores selling those things in town. I also loosed my new glasses on the way to Isla de Ometepe, not sure how because it is one of the "important" items in my luggage. Problem is there it is Semana Santa or Easter Week here and no optionist is working for the next 10 days. I still have my prescription sunglasses but at night they are a bit dark. I cross the small river twice, very little water in it but lots of rubbish, people just throw everything out onto the streets. Back on the hostel I do some more work on my site and play with jQuery. For dinner I get two big slices of pizza and watch some fireworks on the main square. It is Saturday night but the hostel in very quiet, I walk over to the Bearded Monkey hostel for a while but that place has too many smokers, I like the Oasis quite a bit more. 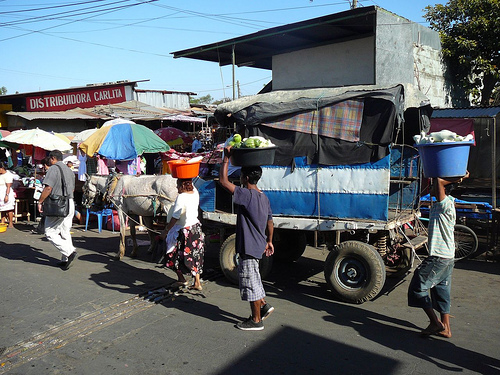 I spent 23 days in Nicaragua but I didn't really do much. Somehow I hit some travel fatigue and experienced some lack of motivation to travel so I took some time off. I think there were three reasons for this. After seven months of travelling it is only natural to need a break. Nicaragua was hot everywhere and it was harder to do things outside in the sun, and finally the hostels in Leon and Granada were really nice and invited me to hang around.
So I spent most of my time in the shade in the Vei Vei in Leon and the Oasis in Granada, the two main old colonial cities in the country. Most time I was working on my web sites and learning new things in the Software development world. The short trip to Isla de Ometepe, an island in the huge lake Nicaragua with two big volcanoes was nice but there also it was to hot to hike up the steep slopes. I really liked Nicaragua anyway, it was cheaper than the other countries and less developed as well.
Full Itinerary:

30-Mar-2009: Cleaning up the effects of a really nasty virus (Granada, Nicaragua)

3-Apr-2009: Spending more time at the PC and in the pool (Granada, Nicaragua)

6-Apr-2009: Yet another day working in Granada (Granada, Nicaragua)