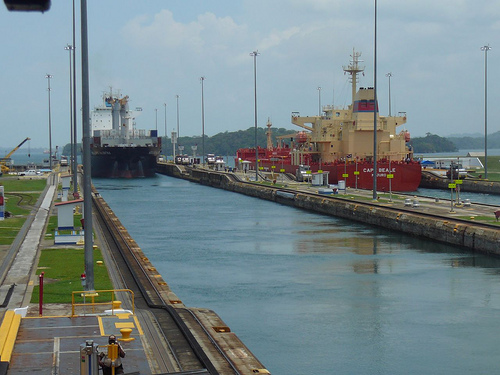 Because of heavy traffic in the morning we miss the train at 7:15 to Colon on the Atlantic coast. As there is only one train every day, we change plans and after breakfast at the huge central bus terminal we take a chicken bus to Colon. This must be one of the slowest buses ever, the driver stopped several times on the way to buy things and I could have walked faster than he drove. It took us about three hours for less than sixty kilometers. Every guide book warns about walking around in Colon, the poorest and most dangerous city in Panama. But at least during the day is seems fine, there is a lot of character here. We took another local bus to the Gatun locks. Most canal tourists visit the Miraflores locks close to Panama City, so we were totally alone in Gatun and saw seven big ships passing through the logs. We walked for a while to a dam on the other side of the Gatun lake and then took a bus back to Colon. It took a while because the police had set up road blocks as two banks were robbed in town in the last two hours. We walk around a bit more in search of some food and then stroll over to the terminal of the 'Panama Canal Railway'. It is a tourist train that runs close to the canal back to Panama city. The return trip to the Pacific is at 5:15 p.m. and the one way ticket costs 22 dollars. The train is cool and has a great observation car. There were two buses with French and American tourists as well as a handful of other passengers. At the end of each car is an open area where we hang out to watch the lake and canal on the right sight and the jungle on the left. The trains goes a bit too fast for my liking being a tourist train, the whole ride took just an hour. I suggest they hire the bus driver from our morning bus as an engine driver. Back at Bjoerns apartment in Rio Abajo we had the Chili con carne leftovers and going with the railway theme of the day watch the 2008 movie 'Transsiberian' which was pretty good, even for people who haven't been on that train.Sleeping in as Bjoern and I had some rum last night. Lazy day in Bjoern's apartment. Planning to see the new Star Trek movie tonight.
Full Itinerary:

1-May-2009: Walking in the hills around Boquete (Boquete, Panama)

4-May-2009: From David back into the mountains to Sante Fe (Santa Fe, Panama)

8-May-2009: By train from the Atlantic to the Pacific (Pamana City, Panama)

9-May-2009: Hiding from the heat on the twelfth floor of the Torres Espana (Pamana City, Panama)

10-May-2009: Walk up the Cerro Ancon and around Balboa in the old canal zone (Panama City, Panama)

11-May-2009: Trip to the Miraflores locks at the Panama canal (Panama City, Panama)

16-May-2009: Another long walk, from shopping malls into the jungle (Panama City, Panama)